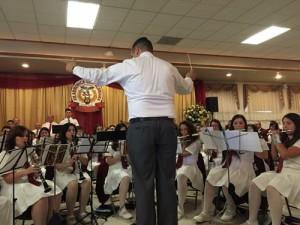 In 1981 Manuel Eduardo Vieira along with Julio Almeida, Jose Pascoal and Jose Silveira Rodrigues determined that a band should be created in Livingston.  Their first task was to secure a conductor.  Manuel Duarte Veiga, who had extensive musical experience in his home island of Terceira, became the first mestre.  Next a place to practice had to be found; the group approached the Livingston Pentecost Club and soon the band was practicing at their hall.  The new band promised to play at all the festivals promoted by the Livingston Hall.  The Sociedade Filarmonica Lira Acoriana de Livingston legally came into existence on April 1, 1982.  St. Cecilia was chosen as the patron saint of the band; this is quite appropriate since St. Cecilia is the patron saint of musicians. 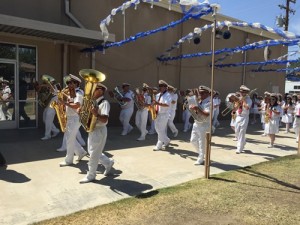 The band has played at many celebrations in Livingston and the surrounding area; they have played many concerts and Christmas pageants.  The band continued to expand and acquired its own facility in 2003 located in Stevinson.  In 2006 the band recorded its first CD.  The first musical composition to be rehearsed and performed to public, a beautiful double step, was named “Heroes of Mucaba”.  The Livingston Chronicle was the first newspaper to publish news about the Portuguese Band – Lira in their May 12, 1982 issue.  Under the headline “FILLING THE AIR WITH MUSIC” the Livingston newspaper reported on the inauguration and published a photograph of the Marching Band.